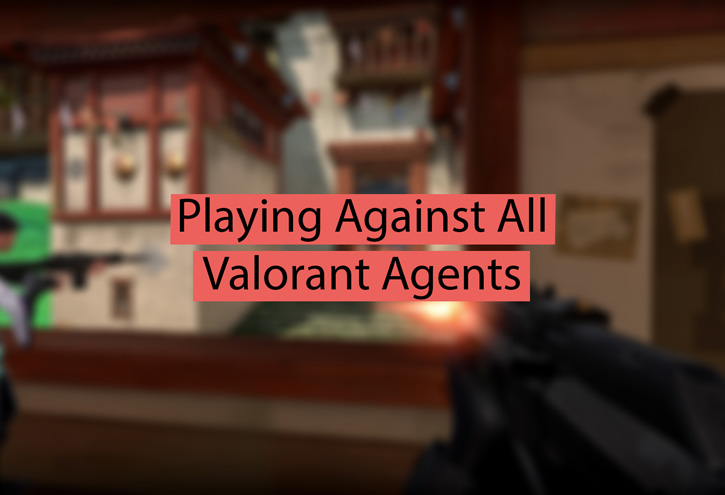 Knowing how to play against every Valorant agent and their unique abilities in the game is easy, but getting to that stage and knowing which strategy to use, and when to use it can be a daunting thought. Here are some ways where you can adapt your play style when encountering each particular agent.

Brimstone is one of the easiest agents to use and provides incredible value for the team with his precision smokes. Covering entryways and blocking line of sight is one of the most important strategies in the game and is required when taking over certain areas of the map.

There are a lot of mind games involved when covering line of sight. People can still push through Brimstone’s smokes and this could be one way of how to play against Brimstone in Valorant. It is always risky to push through smokes, but it can also be a great way to flank the opposing team.

Be aware of the situation and push when engagements are happening elsewhere. If the enemy team loses some duels, they might need to send in others for a refrag which could leave the smokes unguarded.

Breach is one of the best entry fraggers in the game. His blind is slightly better than Phoenix’s curveball and can lure out certain players who are hiding in corners. His kit synergizes well with other teammates and can heavily disrupt ongoing engagements.

When Breach is looking to engage, always remember that he usually executes his combo near entry points. It is a good strategy to do jiggle peeks when playing against a Breach because you can catch him off guard and confirm an easy kill. Breach’s weakness is his lackluster ultimate that can be hard to use and highly situational.

Cypher is the master of information gathering and is a staple on any team. He can hold off multiple entry points at once with his cage and wires. His spy cam can also prevent flanks and his ultimate is also decent.

Always remember to destroy the wires

The wires can easily be seen when you are near them and you can expect them to be at narrow entry points. You can still destroy them if you were to accidentally activate one. You will be revealed once it is activated and you could be prone to wall banging so remember to destroy it quickly and practice your reflexes.

One way or another, you will be caught and revealed by Cypher. Do not panic and make sure you keep holding your angles. Learning how to play against Cypher is using his information against him. If you are flanking and got caught by a spy cam, you can still push and hold an angle that could prevent the team from going back.

Keep in mind, this forces them to cover their back while engaging upfront. You can even purposely enter cages and wires to redirect all the attention to you while your teammates can peek. Cypher’s weakness is his attacking ability as his cage is very situational on the attacking phase.

Jett is the agent with the most mobility in the game. Jett can hold unusual angles of the map with her updraft and can even flank by jumping through walls and floating down to lessen the noise.

Play like there is also an enemy Sage in the game and keep checking for boost strategies. Jett’s weakness is her utility which is lower than most agents and while she can block line of sight with cloudbursts, it is still a lesser version of Brimstone’s smokes.

Her dashes and updrafts can even give her disadvantages during an engagement because her gun gets sheathed for a brief moment.

Practice repositioning your aim when she uses updraft in a fight since it is highly unlikely that she will dash in front of you.

Omen is best used as a flanker in most situations. His ability to cover line of sight combined with his teleport gives him the ability to weave through corners and get in the middle of the enemy team. His smokes are also hollow and could be used offensively too.

Be aware of his short teleports

This is usually paired with his dark cover so it could leave the enemy guessing. Always check if there are surrounding high grounds which he can teleport to. There is an audio played when he uses the ability which gives you ample time to stick to a wall and hold an angle.

Omen’s weakness is that he is predictable when he teleports and can easily be sniffed out. Just learning how Omen has the ability to teleport anywhere in the map can give you an advantage because you can pinpoint where he could be knowing where your other teammates are.

Phoenix is one of the most versatile agents in the game. His ability to blind enemies makes him a great entry fragger while his other skills provide area denial. He can also heal while standing on top of his fire and his ultimate gives him a second life which could also be used to scout and provide information to the team.

Pre-firing can be a good deterrent

When Phoenix uses his curveball, you can always expect him to come out. Since the range of his curveball is extremely short, you have a small window to start pre-firing the spot where the ball was thrown. Only use this when you are at a bad position and far enough away to take cover for the duration of the flash.

Phoenix’s weakness is that he is very predictable especially when he shouts to use his ultimate because he is forced to play aggressively for the duration. He also loses his shields after his ultimate finishes which puts him at a disadvantage.

Raze is another agent with little to no utility. She does not synergize as much as other agents in the game. She does have one of the strongest offensive ultimates in the game which is almost a guaranteed kill once used.

Raze would try to force you to engage while her boom bot is out which could put you at an unfair advantage. It gives you two choices of whether to duel with Raze and ignore the bot, or kite out and kill the bot first before engaging.

My suggestion is to always duel with Raze and ignore the bot because you know that she will be forcing you to fight which could give you the advantage of having a better position when she peeks.

Reyna is mostly used as an entry fragger in a team. She uses Leer to advance and take over certain positions in the map. She has a strong kit that plays around getting consecutive kills that can give defenses a hard time. Her ultimate boosts her damage output along with her other abilities so be careful when engaging her.

The best way to deal with Reyna is communication. You will need a partner to exchange frags with her so that she will not have ability to efficiently use her self-sustaining heals. While her abilities to heal herself are used instantly, the heal is not instant and your partner will have a significant advantage engaging Reyna.

Reyna’s weakness is that she lacks so much utility compared to other agents. This limits her synergies with other agents in a team.

To deal with her, you need to keep track of where everyone is on the map. If you are aware that someone has fallen in certain areas of the map, you have to always keep in mind that they could get resurrected. Adjust to which angles to hold in certain points of the map.

There is a scenario on Bind where you can play against Sage on a round where she has her ultimate up. The defending team puts two people each on A and B while the last one lurks on B short. If the lurker dies and gets resurrected by Sage, you are aware that he died in the vicinity of B short while your team has taken the A site.

If they do take this route, it would be easy to hear their footsteps and you would just need to adjust to the situation and hold another angle towards the spawn. This is one way you can play against Sage and win a round even if she was able to use her ultimate.

You should be wary of certain boost spots in the map when you play against a Sage. Ascent is one of the best maps for Sage’s barrier orb in terms of using it as a boost to create unusual angles. Always play around the possibility of these unusual spots as Sage could even boost herself on top of the little shop in Ascent’s B lobby with the help of a teammate and can potentially hold the cross in mid and A cubby.

Sage’s weaknesses are not pronounced as she excels in all areas of game.

Sova’s strongest asset is his ability to gather information. His recon bolt has a large enough radius to cover an entire site. Learning how to play against Sova who has memorized angles to shoot perfect recon bolts will be tough.

You can always play around the recon bolts by avoiding the line of sight where the bolt lands. The recon bolts are also destroyable with a single shot once they land on a surface. This could be very annoying because of the low cooldown on this ability. His drones are easy to hear as well as destroy but it could easily be used as a bait.

Avoiding detection could also prevent Sova from using his ultimate efficiently. Sova’s weakness is that he is easy to detect once he has used his abilities. You can also gauge where he is coming from when he uses his ultimate.

Viper’s Toxic Screen is one of the best line of sight blocking abilities in the game. She has more than one area controlling abilities and could be lethal to deal with.

Force out her utilities

As an attacker, it is hard to push through the site with her abilities still up. Try forcing her to use them in certain areas of the map and re-engage when necessary. On the defensive side, avoid holding angles that are easily covered by her wall.

An example of this, where it is very powerful, would be in Split. If an attacking Viper goes to A, she can wall off the entire A ramps all the way to A rafters. This leaves the defensive side one entry point through A screens.

The best counter to this is setting up a crossfire with someone in the A back and A screens until the wall dissipates.

In the end, Valorant is still a team game.

No matter how good you think a certain agent is, they are all uniquely strong. It all depends on how well your team can communicate and utilize each other’s ability to win. Even if you know how to play against every Valorant character, you would still need the mechanical skill and effective communication to win the game.