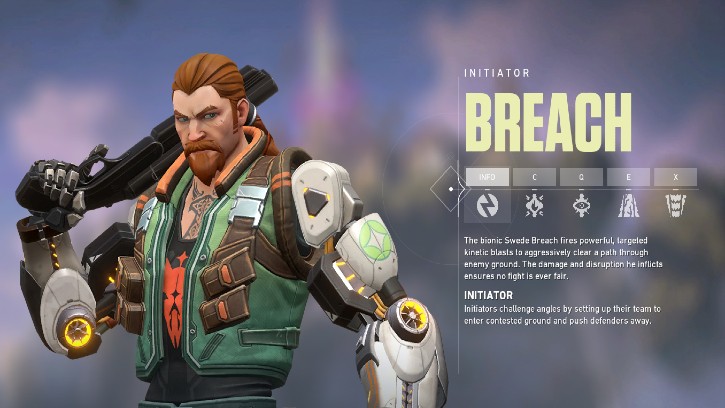 Breach is one of those agents that has a set role so learning how to use Breach can be easy but will be hard to master. It involves having a copious amount of chemistry with your team as most of his kit involves a delayed mechanic. This Breach character guide will show you creative ways to use his abilities.

How to Use Flashpoint

Flashpoint is one of the strongest blinds in the game just because it lasts 2 seconds long. It is best used at a distance and requires surfaces for activation. Aim it at angles where you can flash multiple spots in an area rather than just aiming to throw it outside an entry point.

This example shows how to use Breach’s Flashpoint more effectively. The angle shown will flash the enemies covering the left and the right side of the middle box rather than the normal corner entry where only the right side will get flashed.

Make sure to do this kind of strategy when flashing into areas and think of great markers where it could blind multiple angles.

How to Use Fault Line

Fault Line is mainly used on narrow paths as it can slow and decrease the rate of fire of the enemy. It takes 1.5 seconds to detonate so make sure you use this to force people to disengage and make your team control the area.

Timing is key in using this ability. With a poorly timed Fault Line, enemies can still retake the position they held before the Fault Line was used.

This Fault Line usage has two points to bare in mind when executing. The first point is that you have to know and set up how your teammates can cross the area or engage. The second point is to know where will the enemy reposition during the small of period of time.

If the enemy decides to just take tiny corner near the box, your teammates can sniff it out with a well timed push and just throw any area damaging ability towards that area. If they decide to retreat, you can dismiss any far areas like A Heaven as being a possible reposition.

How to Use Aftershock

Clearing long corners with Aftershock can be a great combo with Sova. It has a delay and can be used to bait out an opponent you know who is outside the corner.

The reason why Sova can be important is that he also can reach those long corners and when the enemy is forced to relocate, his Shock Bolt can already soften him up and he can become an easier kill.

Since it is a far away corner, the Aftershock will not be able to one-shot but if Sova gets to hit his Shock Bolt correctly, the enemy will die or choose to fight at a huge disadvantage.

How to Use Rolling Thunder

Rolling thunder is an extremely long cone-shaped attack and goes block by block so it is better to use it when you suspect an enemy is near you. It is perfect for site retakes and pushes because of its extreme range. This puts almost every enemy in the immediate surroundings at a disadvantage against your whole team.

Breach’s role is crystal clear as an initiator and he excels well at it. Be careful on where you target your abilities as they all do have friendly fire. Make sure to communicate with the team as you will be the key to your team when trying to set up your Flashpoints and Aftershocks.