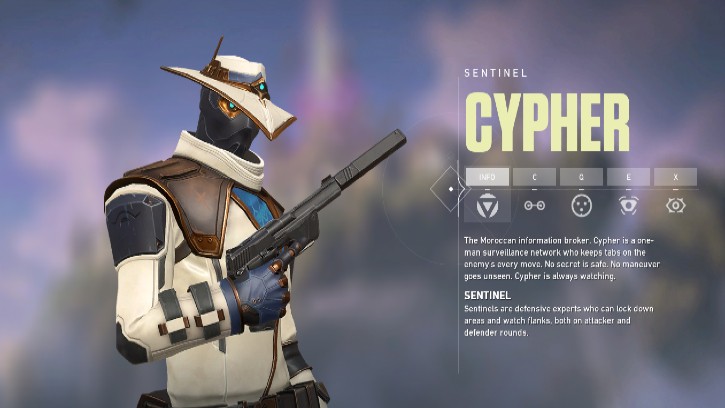 Cypher is considered the best defensive anchor in the game. His information gathering abilities, especially on the defensive side are unmatched by any agent in the game. Getting information is one of the main factors in winning a round. This Cypher character guide will run you through the things you need to keep in mind when playing both as a defender and an attacker.

How to Use Trapwires and Cyber Cages

Trapwires and Cyber Cages are Cypher’s key abilities when defending certain areas of the map. With the amount of charges the abilities can hold, which is 2 of each ability, Cypher can hold multiple entry points in the map.

Try to be more creative when using your Trapwire as it can be easily spotted on obvious entry points as they are mostly seen on walls.

Here is a perfect example of a good Trapwire. It will not be easy to locate the Trapwire once an enemy enters B Windows through B Short. They would have to look up to see the Trapwire and would be vulnerable to a peek. There are only 2 entry points in defending the B Site and this could disrupt the push significantly.

Once the enemy jumps out of the window, they will get stuck mid-air and would be an easy kill. You can combine this with a well placed Cyber Cage and you can pick one enemy off while blocking the line of sight of his teammates.

Cyber Cage is extremely useful because while it blocks line of sight from enemies, it is impossible to push through it. Cypher will be notified when someone has entered his cage and will be slowed and be visible as well.

Cyber Cages can also be efficiently used when placed on a higher wall especially in pathways. Once activated, Cypher or other teammates can see through under the Cyber Cage while the opposing side cannot. This is called the “one way smoke” and the strategy is usable on every map.

How to Use Spycam

Spycam is Cypher’s free ability and can be used multiple times during the round. It is effective for scouting information without the risk of being killed. You should always aim to place it on higher walls so you can get better vision and enemies would have a hard time aiming for it during an engagement.

Remember to always retract your Spycam if it is in a bad position. The cooldown will only be at 15 seconds when retracted. Be careful when using the Spycam offensively because once it is destroyed, the cooldown will be at 45 seconds.

Spycam is also Cypher’s best ability to use on attack once it is used to cover flanks from lurkers. This also means that Cypher will sometimes be busy during pushes when checking for a flank which means you should refrain from being the entry fragger.

Keep an eye out for creative Spycam placements too, as it could also be placed on things like trees. The popular one would be in Haven’s A Garden area. It could easily spot enemies who would try to push and lurk around to mid.

How to Use Neural Theft

His ultimate is another information gathering ability that pings enemies for a brief moment. The caveat is that it is only used on dead targets which can be hard to find the right timing to use it.

If you have the opportunity to use the ability, keep an eye out on the position of your teammates and where you think the enemies would likely be. A perfectly timed Neural Theft can help your team reposition into an advantage.

Cypher has the greatest defensive abilities in the game and for that alone, he is a staple in all team compositions who are looking to boost their defensive power. His offensive prowess should not be underrated.

Remember to always stick with the group going for the sites when playing as Cypher. Once you get the spike planted, you are in control.