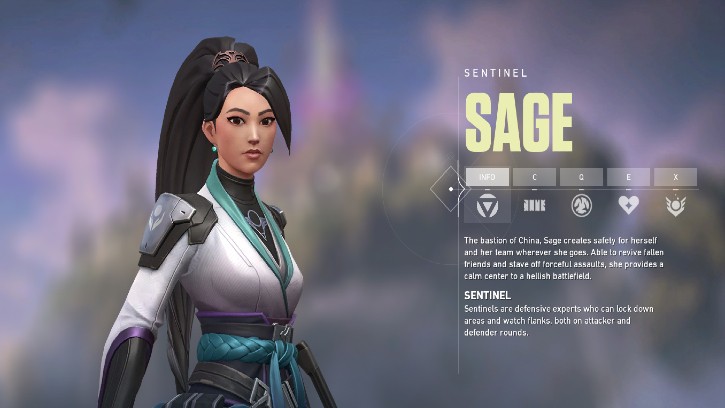 Sage is often characterized as only a support agent. Knowing how to use Sage and her kit will allow you to use her more in different push strategies and can be used aggressively at certain situations in the map. This Sage character guide will show you why she is one of the best agents in the game.

How to Use Slow Orbs

Sage’s Slow Orbs are very effective when used on entry points your team does not want to get flanked from. Your team can only cover a limited amount of angles when pushing and Sage can help punish people who would decide to peek aggressively through the slow.

It is very cheap and can even bring value to pistol rounds when the round is usually started with attackers bringing a numbers advantage in pushing. Sage can delay how each enemy would show up and gives time for the defenders to engage in a 1v1 duel rather than being overwhelmed immediately by the sheer number of attackers.

Can be purchased along with a Ghost set up or just a shield during the pistol round.

How to Use Healing Orbs

The use of this ability is quite obvious and it is to heal and provide extra value for engagements during a fight. Sage players might tunnel vision when trying to use Healing Orbs and get picked off while trying to heal others.

It is not a question of How to use Healing Orbs. It is to know when to use them. Always remember that sometimes if you have a teammates with you fighting and you are near, it is best to support them with gunfire support rather than pulling out a Healing Orb.

How to Use Barrier Orbs

Barrier Orb is Sage’s best ability but it is also the most expensive one in the game. It is used to block wide entry points and boost teammates including yourself.

This is one of the simple boosts you can do in Ascent and can even bring teammates with you to peek the window. This boost is amazing as it helps your team confirm enemy locations from the B site and the Mid Market.

Be careful when using the boost for yourself as it can leave you defenseless for a brief moment and enemies who are aware of it can get an easy kill on you. It is best to use boosts for teammates with a few exceptions.

This is one exception and is one of the most unique boosts in the game. This is harder to set up as you need to coordinate with a teammate to boost you up to the shop. You need him to crouch on top of the small box and at the same time move forward once you try to jump on him.

Human boosts are not suppose to be possible in the game but this is also an exception. Once you get on top of the shop. You can create your Barrier Orb to boost yourself and you will see an angle overlooking Mid Cubby. This boost is amazing because Mid Cubby is on the Defender’s side of the map which will often lead to Defenders peeking through.

With all these things the Barrier Orb can do, it can also act as a line of sight blocking ability. It is better in a way that enemies cannot blindly spray through it and get lucky. It can also be used to shield teammates who are discovered whether through Sova’s Recon Bolt or Cypher’s abilities.

How to Use Resurrection

The ability is pretty straightforward. You can get a teammate up and increase your advantage in numbers for the round. It is smarter to use this on rounds where you have a better shot of winning the round.

You can also use it when the round is too crucial to win. For example, the enemy team does not have a good economy but was able to go for a full buy round. Securing this round by using your Resurrection can lead to 1 to 2 more rounds won assuming you win against a team on an eco round.

You can also keep track of your teammates’ active abilities so you know which one can bring you more of an advantage in resurrecting.

Sage is a staple in all team compositions and can provide incredible value with just her free Healing orb and her ultimate. Her kit shines the most in maps such as Ascent.