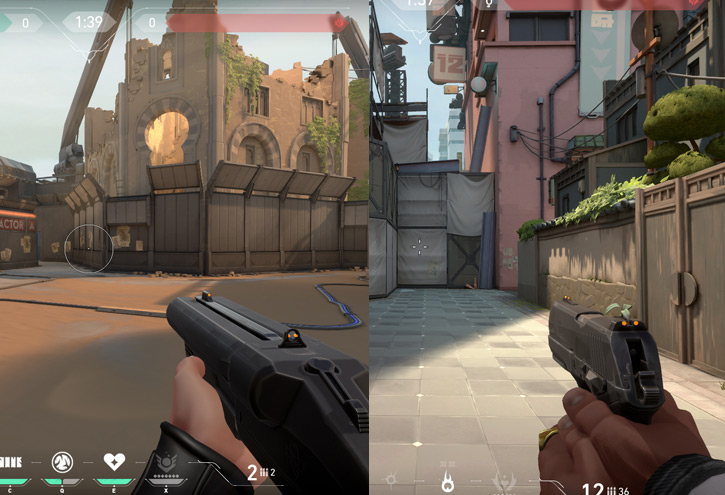 What Are the Valorant Maps?

Valorant is a 5v5 character-based tactical shooter from Riot Games. The objective of the game is to plant or defend the spike in a designated site. A team wins if the spike is successfully detonated, defused, or if all opposing players are killed.

In this Valorant maps guide, we’ll talk about the four maps currently in the game: Bind, Haven, Split, and Ascent.

Each map presents a variety of challenges and gameplay mechanics. To win games, you must know the different callouts and layout of each map.

But before we move on to our Valorant maps overview, it’s a good thing to note that all of the maps will have two orbs. These orbs spawn in the same neutral location every round and will give ultimate points to whoever picks them up.

Bind (codename Duality) is a very straightforward map loosely inspired by the city of Rabat, Morocco.

Unlike traditional FPS maps, Bind has no middle area. All of the pathways lead directly to either site.

The fastest way to get to A site is through A short. However, this is also the most dangerous route. As soon as you go past it, you’ll be exposed to the players guarding the site.

Going through A lobby and into Showers/Baths is the longer but safer route to A. Sometimes, players will peek from Showers into A long, so be ready when you walk towards it.

Similarly, B site can be taken through either B short or B long. Both routes will lead to a separate small area before arriving at B.

A unique aspect of this map are the two teleporters that can instantly teleport a player to a different side of the map. Keep in mind though that it’s no longer possible to go back once you go through them.

Top tip for Bind: Going through the B teleporter will instantly take you to A Lobby. Quickly go through it at the beginning of the round to flank attacking players.

Site A has four main points of entry: A long, A short (also called sewers by some players), A Tunnel, and A Heaven. Most of the time, there will be a player in heaven with an Operator. Make sure to clear that when you’re on the site.

B is situated in the middle of the map and is the most common site to get rushed by attacking players. Outside of B is the Mid Courtyard and Mid Window. Since Window is directly in front of B doors, attacking players will often peek from this position.

Between sites B and C is a garage which also serves as a connector to site C. There is also a window inside garage where defending players can peek from.

Top tip for Haven: In B site, there’s a high platform beside B doors that can’t be reached with a normal jump. If you’re using Jett, use her Updraft ability to reach it and surprise unsuspecting players.

Split is a map with a lot of tight angles and short corridors, making it ideal for close-quarter engagements.

Here, the defenders have the advantage of setting up crossfires and ambushes near the main entry points of each site.

A Main, for example, is where most players set up their defense of A site. A team can set up a good crossfire there with one player in A Main, and another peeking from A Ramp.

Mid is arguably the most important area of the map since it is the shortest link between A and B. Therefore, controlling it is crucial to the success of a round.

From there, players can also go through an underground passage called Sewers that leads to A Lobby. Alternatively, players can go into a room called Mid Mail and eventually arrive in B Heaven, making it easier to take B site.

Top tip for Split: When using Sova, make sure to always buy his Shock Bolt ability. In Split, a lot of players will hide in corners and wait for enemy agents. Use Sova’s Shock Bolt and bounce it on the opposite wall to hit the corner where a player is hiding.

Of all the maps currently in Valorant, Ascent is the most similar to traditional FPS maps. Its design is inspired by Venice, Italy.

The map is pretty straightforward. There are two sites and a middle area.

Site A has two main points of entry, A Main and A Link. A Main is immediately accessible through A Lobby. However, going to A Link is harder because the players have to go through middle first.

Middle is where long-range engagements happen the most. Defenders will typically peek from Mid Pizza with an Operator as attacking players make their way through the Mid Courtyard or Catwalk. Therefore, it’s best to smoke off that angle before walking out.

Middle will also grant access to B site through a small area called Mid Market, making it easier to wrap around B.

Top tip for Ascent: The glass on A window is breakable. Players can walk through there and flank the enemy players on A site.

Each map in Valorant is unique from one another. Some of them even have features that are unique to all FPS games.

By reading our Valorant maps guide, you should have gained a basic understanding of Valorant’s maps. Knowing the different callouts and layouts of these maps will give you a competitive advantage over your opponents.