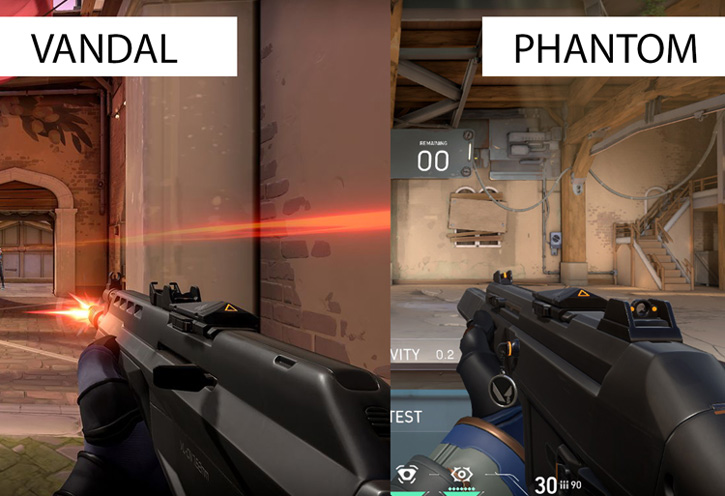 Have you ever played a game of Valorant and been left wondering which gun is better, the Phantom or the Vandal?

If the answer is yes, you’re not alone. Most FPS games have guns that are considered by players to be the best. In CS:GO, for example, it’s not uncommon for players to drop their M4A4 and pick up an AK instead.

But what is the best assault rifle in Valorant? Is it the Phantom or the Vandal?

In this guide, we’ll try to answer that by talking you through each gun’s stats, their damage difference, and when to use the right gun. By the end, you’ll have enough knowledge to help you decide which assault rifle is best for your play style.

Quick Navigation show
What is the Best AR in Valorant?
Phantom vs Vandal Stats Comparison
Damage Difference
How to Decide When to Use the Phantom or Vandal
Spraying vs Tap-Firing
Maps
Attacking vs Defending
Conclusion

What is the Best AR in Valorant?

In Valorant, the Phantom and the Vandal are two of the most powerful assault rifles available. But which one is better? Well, the honest answer is they’re both equally capable of being the best – depending on how you use them.

Aside from having the same credit price, the Phantom and Vandal are two very different guns. Both guns have their own advantages and disadvantages. These will depend on your play style, if you’re attacking or defending, and what your role is within your team.

All weapons in Valorant have different stats and attributes. During the buying phase, hover your mouse over a gun and it will show the stats on the right side of the buy screen.

Here is the stats overview of the Phantom vs Vandal:

As you can see, both guns cost 2900 credits. Both of them are also fully automatic, and both have medium wall penetration.

The main difference is that the Phantom seemingly has better overall stats than the Vandal. The Phantom has a faster fire rate in both the primary and zoom mode and has a bigger magazine capacity. This is a big advantage over the Vandal in chaotic duels as it allows you to shoot longer without reloading.

Another big advantage of the Phantom is the silencer. In Valorant, weapons with a silencer don’t show the visual tracer bullets when they’re being fired. This can be very advantageous when you’re shooting through smokes or when you’re firing from a sneaky position.

In this case, the Phantom is a better overall AR than the Vandal.

Now let’s take a look at the damage output for each gun.

In Valorant, damage dealt is different depending on how far you are from your target, and which part of the body you are hitting.

Most of the time, a direct hit to the head will result in an instant kill or headshot, while hits to the body and legs will give less damage.

Take note that the arms and hands are also part of the torso hitbox and will take the same amount of damage.

Here’s the damage difference between the Phantom and Vandal:

As we can see, the Phantom’s damage decreases the further you are from your target. If an enemy agent is wearing a heavy shield, you can no longer kill them with a headshot beyond 15 meters. This is a huge disadvantage if you are on the defending team because you’ll be forced to fight closer to your enemy.

On the other hand, the Vandal deals the same damage to the head, body, and legs at 0-50 meters. This means that even at a distance of 50 meters, the Vandal will still kill an agent wearing a heavy shield with a headshot.

When it comes to total damage output and range, we can say that the Vandal is the better gun.

How to Decide When to Use the Phantom or Vandal

Now that we know every stat about the Phantom and the Vandal, it’s time to talk about when to use them.

Spraying is when you hold the M1 button and let the gun fire in full-automatic mode. If you already know how to spray control, we recommend using the Phantom since it has a faster fire rate and a reduced bullet spread.

In comparison, the Vandal is best used for tap-firing because it’s much harder to spray and can fire fewer bullets per second. The Vandal’s damage output also offsets the reduced rate of fire since fewer bullets are needed to get a kill anyway.

Currently, there are four different maps in Valorant: Ascent, Split, Bind, and Haven. It’s important that you’re familiar with the map and the common spots for players so you’ll know which gun to use.

Each map has different layouts and advantageous spots. Split, for example, has a lot of tight corners and short corridors. Duels are often in close quarters and short. In situations like this, it’s best to use guns like the Phantom where you can fire a lot faster.

If you’re playing on a map with a lot of wide spaces and long pathways, we recommend using the Vandal for its superiority in long-range engagements.

On the other hand, defending sites will often require you to remain in certain spots and wait for the enemy to peek you. In most cases, it’s best to pick a spot where you are far away from the attacking team’s entry points. That way, you’ll avoid getting ganked when they do decide to attack. Positioning yourself far away from entry points will also allow you to find cover when you miss your initial shots. For these reasons, you’re better off using the Vandal as a defender.

So, what is the best assault rifle in Valorant? Despite having a slower fire rate and fewer bullets, we’re picking the Vandal as the best AR in the game. With its 50-meter headshot capability and better damage potential, the Vandal wins over the Phantom.

However, depending on your own play style, you might prefer the Phantom. At the end of the day, much of this comes down to your own personal preference, ability, and in-game strategy.