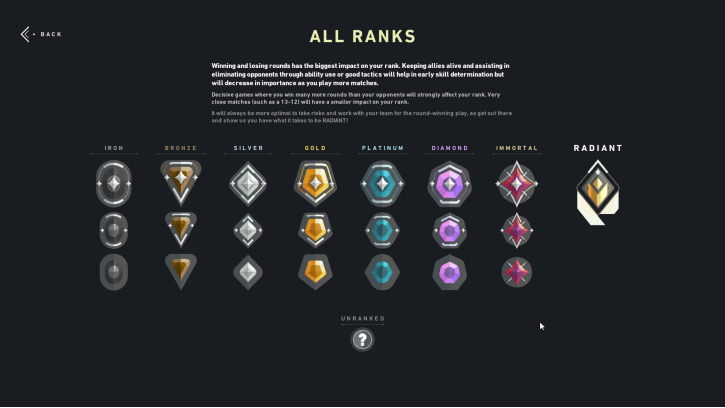 Like all competitive multiplayer games, ranked mode Valorant are always the go-to for players looking to pick up the game. This Valorant competitive mode guide will show you all the mechanics such as ELO system, ranking type, queuing and decays involved in determining your rank in the game.

Quick Navigation show
How Does Ranked Work in Valorant?
What Are the Current Ranks in Valorant?
How to Unlock Ranked Mode Valorant
How Do I Rank Up?
Is Valorant competitive?
Conclusion

How Does Ranked Work in Valorant?

The only difference in Ranked mode Valorant is that when the game is tied to 12-12, the game will go into a different overtime format. The format for the overtime will be a win-by-two basis. Each team will have equal chances of winning the game because each team will play once on the attacking side and on the defending side.

Every player will have their economy reset to $5000 and have 4 points each to their ultimates. This resets each round so do not worry about spending it all on one side.

There is also an option to just end the match with a draw by majority vote. If the game has not been decided by one round of overtime, it will require less players to have the match ended by a draw. The process goes as follows:

Players cannot lose rank if the match ends in a draw but instead some might gain a boost to their rank based on their performance.

Teams can also choose to surrender if they feel that they absolutely have no chance at winning. The team voting will require 100% of the team to agree before surrendering.

To queue in ranked games with a party, everyone must have at least a 2 rank tier difference apart from each other. There is no restrictions to how many you are in the party to queue for ranked mode Valorant. They made it this way so people can enjoy playing the game with friends.

There are a total of 4 maps in the game and it will be chosen randomly among Split, Haven, Ascent and Bind. You will get to see which map you will be playing in and adjust accordingly to which agent you would want to play.

What Are the Current Ranks in Valorant?

The ranks are shown in the image above. There are 8 rank tiers with 3 corresponding levels in each of the tier except for the Radiant rank. Your rank will be hidden if you reach 14 days of inactivity. This does not affect your rank directly as it will just be hidden until you play a game. Your rank will not decay because of inactivity.

How to Unlock Ranked Mode Valorant

To unlock ranked mode Valorant, you simply must play a total of 20 unrated matches. This gives players ample time to unlock at least two new agents to their roster. This also gives enough time for players to familiarize themselves with all the agents in the game.

If you want to achieve a higher rank for the placement matches, make sure to practice more in unrated matches or read guides online. Once ranked is unlocked, you will have to go through 5 placement matches to finally get your rank.

How Do I Rank Up?

Getting MVP’s after the match will also help you boost your rank. The game will also notice if you are always crushing the enemy team. This is their way of finding smurfs and getting them immediately to their current rank. This kind of system also helps them track rank boosters and deal with them appropriately.

You can also lose significantly more rank by surrendering so it is best to always try to win no matter the gap. If you do perform in a mediocre manner, you will get lower rank points even in wins compared to others who won and played fairly.

Make sure to perform at your best when queuing as it could help you lessen the loses and increase the winnings. You can always warm up in unrated matches before playing seriously in competitive ranked mode Valorant.

Everything is designed to help you get to your rank, based on your skill level, as quickly as possible.

The system is trying to pit players as close as possible in terms of skill. The reset definitely helps when it comes to making Valorant competitive. Players will try their best to get a rank as high as they can within a certain period of time.

This prevents players from feeling stale after attaining a rank they cannot get out of. There is definitely more competitiveness when it comes to placement matches and makes each start of the season as active as possible.

There might be a drop in competitiveness or activity during the last few weeks of the season but the ranked mode Valorant reset is definitely one of the most anticipated events by players. Most games use this to even feature new additions or updates into their growing game.

Ranked mode Valorant is one of the key things that make Valorant competitive. Although these are not as heavy as tournaments, this makes the players feel rewarded when they get better. The seasonal rank reset will make Valorant as competitive as it can be while prolonging the longevity of the game.