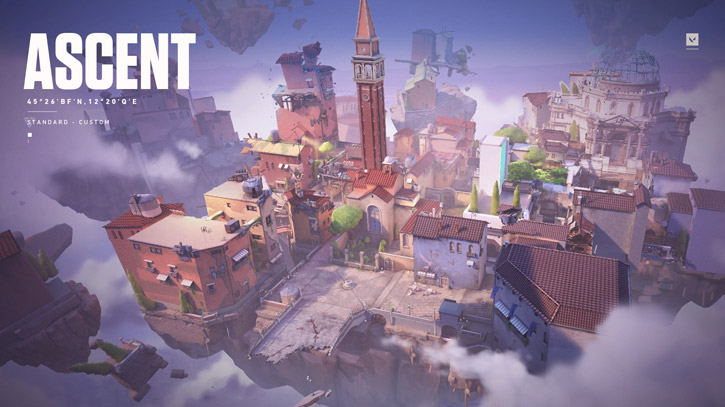 In tactical shooters, the map becomes a main player with heavy influence over outcomes. It can either be an obstacle or an advantage. This solely depends on the team’s understanding of the nuances of the map and the logic behind various decisions the map designers made.

As every FPS gamer knows, it is crucial to understand different aspects of a map. Important angles to hold, potential attack zones, areas to monitor, best places to camp and common routes of rotations, and long/short engagement zones are all built into FPS maps to create the most holistic gaming experience.

In a team-based strategy shooter like Valorant, this knowledge of maps is usually the difference between victory and defeat. When you know where sage walls are most effective, where Recon Darts should go, the best Cypher trip wire locations or where to plant; your path to victory is easier as you can force your opponents to counter your strategy rather than play into their game plan.

Ascent is one of those maps which has been in development for a long time. Footage has been released of a two year-old testing game of a very basic ascent without the design elements. This shows how carefully and intricately planned this map is. Every location, every crevice and crate make sense on this map and there are several pressure points that players with map knowledge can exploit.

It is common knowledge on the internet that Ascent is Valorant’s very own Dust 2. It is widely regarded as the best map on Valorant because of its simplicity and many possible pathways to victory.

It has two bomb sites A and B which are located on either ends of the map. Connecting them are the two spawns with an expansive mid area with a lot of cover and angles to make it an engaging battle ground. Neither side of the map is overpowered with a lot of cover. There are long pathways for OP’s throughout and possibilities of many close range battles.

Both spawns have clear routes to bomb sites with both areas having clear heaven points for defenders to hold but also plenty of ability options that will neutralize them if you know the map well and use your abilities wisely. Let us examine the map in detail which will arm you with a lot of tips and hacks you can use the next time you play ascent.

Attacking on Ascent is straightforward. There are two pathways to each bomb site – one direct route and one through mid. You force your way in and plant the spike and hold it to gain the win.

From attackers spawn the route to B spawn is the more commonly taken route. You reach B site through B lobby which leads to B Main corridor, one of the most intense and well designed points in Valorant.

When the round begins and the barriers open you have two options, to rush and take cover behind the crate and launch attacks or peek from the angle. Remember, there is usually someone peeking from the dender end and the Cubby and stairs from Market are important peek locations to check when you storm the front.

The shed on the left is a common location for players like Brimstone and Cypher who use the cover of the walls and table to launch Smokes, Cypher cages and gather information.While attacking B, keep in mind B main leading to defender spawn too. This area is often overlooked and has OP’ers ready to pick off brave rushers. Also, this gateway provides a good cover option for snipers as they can shoot and take cover between shots, making this a popular location.

Pro Tip: Sova and Sage are excellent options to attack B site because of the window on top of the corridor wall. Sova’s Recon Dart can be sent directly into the site to check and displace campers in the corner and B Back (the closed-off area behind the site). Also, Sage can erect her wall and peek through the window, picking off unwary defenders holding B site.

Phoenix, Reyna and Breach are great choices to attack B site too, as they can flash and rush. Leer is an important ability in these areas and is often used by Reyna mains to get first blood. Phoenix’s Curveball is notorious for blinding teammates but can be used effectively as a tool to push B site too.

A site is known as the slightly tougher area to push because of the many options the defenders have to hold the area. While attacking A, your team objective must be to push early and gain access, taking out defenders with precision. Failure to do this might lead to a man disadvantage. There are multiple corners to check before you storm though, so read on for insider tips.

Attackers can push A through the direct path from spawn on through Mid. A lobby is another well constructed battle zone. With narrow angles and a large doorway, it gives plenty of opportunity for opponent OP’ers and rifles alike. Watch out for the cubby at the end of the passage as there could be an enemy phoenix camping with his Curveballs ready to pounce at the first sign of footsteps.  It is crucial to have a strong entry fragger when attacking this area.

When taking the mid route, remember that there is a cubby behind the lit-up boxes. Peek all corners before rushing. Use agents like Sova and Raze to get intel when attacking from the mid. Also, if defenders are rushing mid from A site, agents like Jett and Omen can rush them and pick up frags.

Pro Tip: A lobby is tough to negotiate, use phoenix flashes into the doorway to set up a teammate Op’er to peek corners on Heaven. Also, agents like Jett are really efficient here as she can lay down a smoke and dash into it, causing a distraction and drawing fire. This strategy can help teammates pick out distracted opponents.

Even agents like Omen and Brimstone can dominate this area. Use Omen’s smoke as a cover to push. The Phoenix + Omen combo can be deadly rushing A. Phoenix can hide in the smoke and send out a flash and rush without fear of blinding self. Picking up an entry frag with this strategy can prove handy in pushing opponents back.

Omen could also use his Teleport to get behind the generator in the center of A Site. This is an excellent way to create a distraction to help teammates press and could target enemies under heaven camping and running down fire on teammates. But, mix up these Omen plays, don’t get predictable.

Ascent is an extremely balanced map and offers scope for both attackers and defenders. But the addition of doors might seem like it favors attacks but serves as an excellent defensive tool. There are two doors located, one on each site which blocks off one entrance. Defenders holding this spot often shut down these doors that take a lot of bullets to breakdown. They serve as excellent detractors and detectors while holding down a site on Ascent.

A site is a very fun site to defend. Teams often close off the door to the right and this leaves only one big doorway to defend. The well shielded heaven and hell offers excellent locations for an Op’er on Heaven and a Raze with a vandal in Hell. While the Op’er picks off rushers, the Raze can hold back and use the Paint Shells, Blast pack and Boom Bot guided towards the doorway to displace opponents hiding from the Op.

Pro Tip: Another excellent strategy to guard A site is walling off the main doorway using Sage’s wall. After this wall is up, the Op’er from heaven can pick off opponents who jump to see inside the site. Also this wall can shield Raze who can lob Paint Shells over it onto unwary opponents. Even Sova’s Shock Dart can exploit this wall to get kills.

Another strategy is to be aggressive while defending A. A Jett player can prove very handy here. Use the Tailwind and Quickly use Updraft to get on top of the wall on A main near where attackers enter. This surprise strategy was used by T1 during the Valorant Invitational Cup to good effect. Armed with her Ult – the Bladestorm, this strategy can kill 3-4 opponents slowly inching towards A doorway.

Holding B site is not as straightforward but it is necessary. Closing off the market door and watching the Tunnel doorway is a good strategy for beginners. Use Sova to gain info through the windows using his Recon Dart. Sage players can wall off the doorway and Jett players can exploit this to gain vantage over pushing attackers.

Use B Main to OP opponents later in the game. The Viper wall and Phoenix wall can be efficient in blocking out the tunnel entrance too. Agents like Brimstone can defend B using his smoke to slow down opponents and picking off peekers. Market is a common rotation for players attacking through mid, do not forget to mark this entrance.

Pro Tip: Make a sage wall on the Tunnel entrance and an Omen can teleport to the Corner inside the tunnel and get behind opponents looking to peek. This strategy can give Omen players a few kills and force opponents backwards.

Also sniping from the Back can be a good way to pick off opponents who have forced their way into B site.

Mid play is crucial on Ascent for both Attackers and Defenders. B-Link and Armour is often the location of an Attacker press. Defenders can use Catwalk or the Arch to pick them off.

Use flashes to enter and get first blood here. The arch leading to Market can be stormed and is often under marked. This gives attackers an alternative entry into B site. Taking the mid route into A site is tricky and can be met with a wall of bullets. Use agents like Reyna and Sova in these situations as they can gain intel (Sova) or peek around corners after getting a kill without damage (Reyna).

Top mid is a good position for aggressive Op attackers. You can pick off defenders in Market using this strategy. Agents with Mollys are effective in guarding mid as they can flush out opponents behind crates or doorways.

Use these effective plays and strategies to maximize your performance on Ascent. This is a very regarding map that gives intelligent players the upper hand. You cannot storm with a shotgun or run around killing campers. Use our strategies in the game and find yourself looking like an Immortal ranked pro. The pressure points we describe and tips we have suggested will get you out of tight spots and arm you with an arsenal of ways to attack and defend on Ascent.