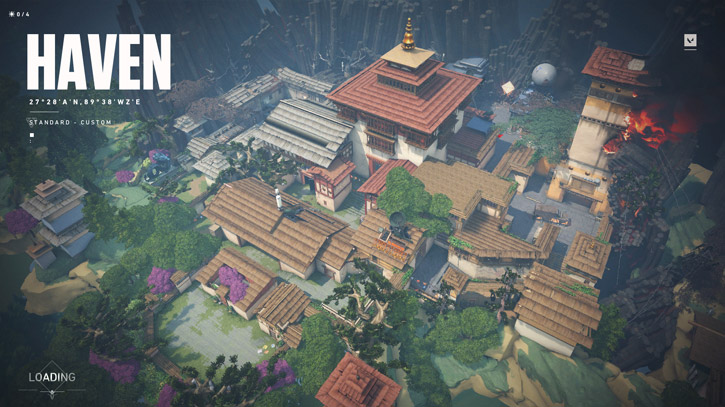 Heaven is a highly contested map on Valorant. With three bombsites bundled together, this map is unique in the FPS landscape for the amount of attack and defensive possibilities it offers. The map is slightly defender friendly but as the pro’s in recent tournaments have shown, attack on the map can be extremely effective too.

There are multiple highly contested zones and areas that need attention in order to stop rotations and secure the win for your team. If you find yourself on the losing side on Haven frequently, this guide might come in handy to increase your map IQ and get those W’s in the bag.

Attacking on Haven offers 2 different routes. It favours both attacking patterns – rushing and a measured approach. For teams that like to rush, there is the quick jump into B Site. If you are looking for a more measured march onto a site, A and C offer a more strategy potential too.

This gives the map with a high skill-ceiling and favors both brave approaches and clever plays with efficient use of agent abilities.

Attacking B Site through mid is a risky play. But a well-planned approach can be very rewarding as you can get a quick plant in and hold this site efficiently. There are two entries into B site- through Windows (Balcony) and through Doors into Courtyard.

While attacking through Window, take both angles on offer. One agent on the right peeking Doors into C short and one player on the left peeking into B Courtyard. This way, you can cover both of the largely contested points and gain intel on enemy positions and pushes.

Smoking doors is crucial to block sight while you push B site. Agents like Jett, Brimstone and Omen are great agents to try and hold doors as Duellists like Phoenix, Raze or Reyna can then push B Site. While pushing B Ramp, use Sova to gain intel on the small cubby on the left and also check the stacks (tall boxes) on the left. Raze and Jett players usually boost onto them to gain vantage over aggressive pushers.

The advantage of attacking B site is that if the defenders stack either A or C site, attackers can use the opposite site to rotate to B, providing a more robust defence to the spike. Molotov’s are crucial to holding B site. As there are 3 entries into the site, blocking one out with smokes and mollies are crucial.

Pro tip: Use Killjoy or Brimstone’s Molotov and plant an Omen or Jett smoke on top of them as the spike timer counts down. This is because as time reduces, players will be forced to push into the smoke and will be hit by the molly. Killjoy’s Molly is especially effective in this setup as it can be activated as smoke is breached.

Both sites have a similar setup and attacking pattern. From Attacker Spawn, you can take two direct routes to each site or choose to rotate through mid. The direct pathways are most preferred as they offer the path of least resistance to planting the spike.

While attacking A Site you can take A long or A sewer. Expect resistance in both areas. When you attack A long, always gather intel and watch out for opposition trip wires on A Ramp. Also A Heaven and Hell always has defenders with Op’s looking for aggressive pushers. Use smokes and double peeks to trade them out.

A Sewer requires a patient build. Use Phoenix’s Curveballs to push through. Breach is a great agent for sewers too, as he can concuss a few agents holding A Default, forcing them back and giving you the push.

Pro Tip: A Lobby is a great area for sova to fire off Recon Darts from. Learn the line ups to aim the dart directly on top of A Box from just outside A lobby. This gives you massive intel and throws a dampener on enemy plans.

Attacking C is very similar. Dragon Arch and Dragon are crucial areas to control. Watch C Cubby and use this point to launch BoomBots, put up Sage’s walls to help your push or delay opposition fire.

Pro Tip: A Viper wall along the right side of C Long often walls off a lot of the defence as they tend to hold positions behind C box or Connector between C and Mid. A well placed Viper wall will give you a free path to C site and give you a plant. When the wall comes down you can engage in close-range intense battle with surprised attackers.

While entering through Mid, keep in mind to check Light (The window over Mid Door Room). Often, there are agents here looking to inflict damage. When entering through Mid, Keep flashes and smokes handy as they will be needed to block site and gain ground to force defenders back and get kills.

Reyna is designed to attack through MId. She can pick frags and become temporarily invincible. Because there is a scarcity in cover locations on mid, this can prove priceless and she could pick 2-3 quick kills when used by an experienced Reyna main.

Defending on Haven is a question of division of labor. Most beginners and amatuer gamers cannot predict where the opposition will plant (as you play random players). Unless an obvious pattern rises, you will have to try and guard most areas of the map.The best way is to send your best fragger into B site and a 2-2 spilt between A and C. This is the most common setup in pro tournaments too.

If there is a 4-1 or a 5-0 stack on any of the sites by attackers, you can get immediate intel from teammates, enabling a quick rotation to support. We suggest a Cypher player to hold B or A Site because the camera and Trip Wires will come in handy with intel. Also, a good Cypher can hold B, pick up a frag on an aggressive push and use the Ult ‘Neural Theft’ to reveal enemy locations, making the game easier. Raze and Killjoy are both excellent agents for a single man hols too. Raze can use her explosive attributes to delay pushes and Killjoy can stop a push in it’s tracks with a well-placed Pixel Storm or Turret.

Pro Tip:  Use Sova’s Recon Dart with a double bounce into B Window to the left. This will give you intel on an enemy push into B through WIndow. You can then use your Ult- Hunter’s Fury to pick up definite frags.

Defending C and A site is a question of patience. Wait out the barrage of enemy abilities and smokes thrown at you and try to hold position till the push. Both sites offer many crates and cubbies to hold for Op;ers and Riflers alike. C Alley is an excellent area for agents like Jett who can wait for the push and get on top of C-Box with her Ult to wreak havoc.

Hold Heaven on A with your player with the best aim. They can often pick out one or two players who push onto A site. This is also a great place for a Cypher hold as Sentinel’s Dapr showed in tournaments. A trip wire on Heaven entrance gives you ample cover and you can angle your camera and Cypher Cages at both entrances of A Site, gathering all the intel you will need.

Pro Tip: You can neutralize a C push with Omen Brimstone combo. Use Omen’s smokes to stop a push and leep attackers hoarded in Dragon and hit them with Hellfire. If your B Site defender can rotate through mid onto Attacker spawn, you can pick off people fleeing from the ult while catching frying a few opponents from the ground up.

Also, while defending C, make sure you have an Op watching C long from round 4 onwards. This is a prime location for intense Op battles and agents like Sova can use this long, walled corridor to do significant damage with Shock Darts. Raze’s Rocket too can be effective if you clear out Dragon and cause heavy damage as it is a closed off area.

Pro Tip Delay pushes using Brimstone on A site. Block out A long to stop attacking Op’ers and Use Vipers Pit to possibly block out a site. Though it is used by attackers, a sudden deployment might be effective in preventing last minute plants, forcing attackers to rotate, running out the clock and securing a win.

B Window: The window from Attacker spawn onto B Ramp. Common area for battles, even a few brave OPers.

Gong: The small cubby behind the Big Box on B where defenders hide after plant. Called gong because of the large steel plate on the wall.

Sewers: The area of A lobby used by attackers to launch a two-pronged attack on the defence. Wall off or smoke the entrance.

Dragon: The C lobby from attacker spawn. Called Dragon because of the Chinese dragon image on the far wall.

Door Room: The connecting area between C and mid when pushing from attacker spawn.

Light: The window above Door Room  where defenders push aggressively onto mid.

Towers: The two stacked crates on A site where Jett’s and Raze’s often camp

Gardens: The entire mid region is also called gardens by players to signal the presence of opponents in the region.

Cubby: The region on C long from where attackers take respite from defender OP’ers and gain ground. Use Brimstone Ult to clear the area.

A Box: Default plant location on A site.

Red: Area between A site leading to B site. A good area for phoenix to hold and rush at enemies using his flashes and wall.

Heaven: The window on A site above the box. Often Cypher Op’ers or just OP’er hold this location to provide cover fire onto A site.