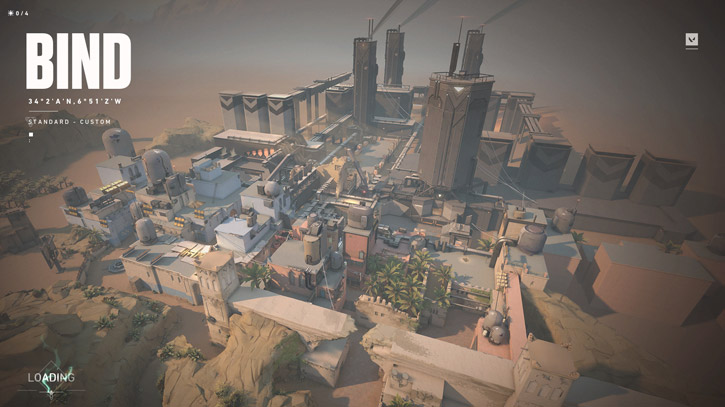 Understanding and exploiting the map in which the game is played is crucial to securing wins regularly. Usually, the team which knows all the key traffic points, camping zones and glitch points secures the win. Riot Games Valorant is no different.

This article will look to analyse BIND, one of the more liked maps on Valorant to try and guide players through the gritty details. Equip yourselves with crucial information about where to attack, how to defend and key areas to watch out for where various agent abilities are used. This will equip you with vital information required in securing the win on Bind with your squad.

The game has two modes of play – attack and defence. Which attacking you carry a spike and the team objective is to plant and guard the spike till it detonates.

Attacking on Bind gives you a lot of options to hit both A site and B site. Should your team choose to hit A, there are two main paths of entry. One through A short and other through Bath.

While attacking A short, you need to keep a few things in mind. Firstly, Bind is a very unique map on Valorant because of the presence of portals. These portals take you to another point in the map. There are two portals on Bind, one from A to B and another from B to A.

While attacking through A short, attackers usually smoke sight from heaven using Jett, Omen or Brimstone. This is because A heaven is a common point for Operator (AWP) players. The boxes on the right and the wall on the left give you ample peaking points to try and gauge where Defenders are holding B from. Common points include U-Hall entrance (behind the portal), A heaven and the peek angle from Bath entrance.

Bait and Switch A Short

The portal gives you an option to bait defenders into guarding A and using agents like Jett and Omen and rotating to B. A couple of players ( preferably Phoenix or Brimstone) can hold A short while the spike carrier and 2 more players rotate to B using the portal. This gives them time to plant in B while the defenders have to take a predictable path to B which can be easily guarded.

This is another route of approach for attackers looking to get the spike down on A site. The bath is a location of many intense battles and a lot of potential to effectively use character abilities. Agents like Phoenix, Brimstone and Breach are really effective at breaking through the narrow and tough angles of bath. Rush or take it slow, but this area is crucial to securing a plant at A site.

Use phoenix to flash the corner of Bath and use agents like Sova to gather information of opponents camping spots on A site. Watch out for heaven, Use agents like Jett to smoke and break through the first line of defence, causing a distraction which can be taken advantage of. Also, Raze’s Boombot is an excellent tool to clear out Bath and gather some info.

Sova’s Recon Dart can be shot through a hole in Bath’s ceiling. You can angle it towards the middle of A site, gathering info on a large area. Then you can use the Shock Darts to hit the common plant location on A site in the crate gap.

B site is well designed for attack. While A is expansive with a lot of open space for long range engagement and potential for OP players to pick up frags, B is compact and forces short range engagement.

Use the hookah entrance through B short as this is an excellent push location. Players using a combination of agents like Omen and Phoenix is an excellent way to take advantage of B. Push using Omen’s smoke as cover and Phoenix can use his flash out of the smoke without the risk of blinding teammates.

A well guided flash can enable your team to storm through and pick off enemies flailing to hold Hookah. Also, Breach is a good pick to storm B as his Fault Line and Flashpoint can both disorient opponents for a quick rush. Be careful though as opponents could be hiding on the other side of the crate both inside and outside the window. Never forget to peek corners before rushing. Also, the Shift key is your friend here.

Breach’s Thunder Roll and Sova’s Hunter’s Fury can both be used to clear out B Window from the other side of the wall on B short.

The Owl Drone and Boombot also can be excellent distractions to push in.

Playing defense in Bind is a thankless job. Players find it easy to attack through ‘Hookah,’ a window leading to B site. It is crucial for the defending team to gauge where the attackers will go.

We suggest a 2 member team with an OP or Phantom/Vandal to watch B long. But most attacks come through B short and through B window. A Sova or Cypher can set trip wires or gather Intel using the recon bolt to stem the flow of attackers through Hookah. But, this location is crucial to watch.

Sage’s wall is crucial to holding B site on Bind. Use it to wall off Hookah or B long entrance giving players time to focus on one entrance and pick off aggressive pushers.

Getting first blood on Hookah usually forces opponents backwards. The narrow corridor is often a location for effective battles. One way to counter a flood through Hookah is B elbow. A Jett placed in B Elbow can do a lot of damage. Sitting tight in Elbow as enemies enter through hookah and then flying on top of the crate on the right is a good way to surprise opponents and pick up a few frags, delaying the plant.

The portal on B site is precariously placed and is useful when you gather intel that the attackers are planning a team rush of A site. In that scenario, you can use the portal to get behind opponents sneaking into Bath or A short. An excellent strategy for players using agents like Reyna who can then use these frags to cause more damage.

Defending A is more straightforward. Most teams use 3 points to hold A and watch all angles of entry. A heaven, A Lamps and Bath entrance. Watching these three points with agents like Sage, Viper and Brimstone is highly effective. You can use Brim’s smokes to block out both entrances and an OP on heaven could watch angels with a lot of cover.

Sage’s wall and Slow Orb can be effective here. Slow Orb can stop enemies from pushing through A short and the wall could close off the bath entrance, forcing teams to revela positions or rotate.

Agents like Raze and Jett could use their jumping abilities and get on top of the crate on A Cubby to get a few frags of slowed down opponents. Make sure that both angles are watched, or you could get outflanked.

A Sova player holding A can send his Owl Drone through the teleporter to scout out people looking to enter B window. This can give vital information to players holding B site.

Callouts are crucial in any tactical game as it improves communication and strategse quickly during rounds. Valorant is no different. Let us look at the common callouts for Bind.

Use this guide to Bind as a blueprint of most rounds in the map. This information and tips might come in handy when you are overwhelmed during a round or planning strategies before the start of the round. Learning the nuances of this well-designed and unique area will ensure you can rake in kills, outsmart opponents and secure the victory.