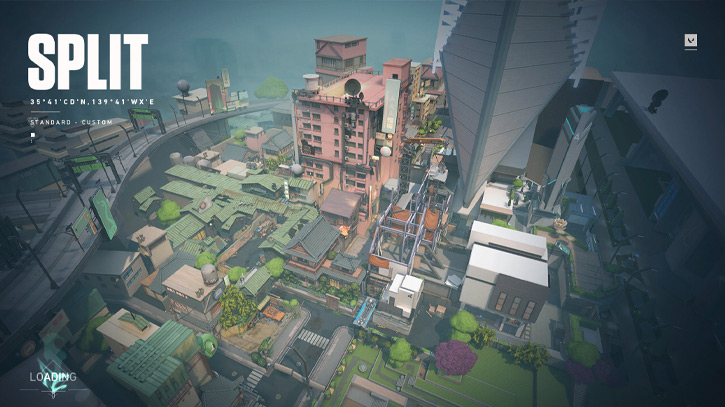 As a tactical, team-based shooter, Valorant has placed exceedingly high efforts into designing their maps. Each of the four maps have been designed to maximize combat and create an instant engagement battleground, if desired. But, players can also take a cautious approach, which makes the game so popular.

Split is one of the four maps and is one of the more divisive ones. Leaving the fan base split in  the middle about it’s likeability. But Split is an extremely well-designed and combat heavy map which has clear zones designed for brilliant peek angles and unexpected hiding spots and ability zones that maximize each agent’s effectiveness with abilities.

The more serious Valorant players find this map very effective in tournaments and the map has its moments when it comes to creating and facilitating jaw-dropping moments. We will look at all the nuances of the map and see what makes it work and arm you with tips and tricks to maximise your performance in this map.

Split is a map that has a very closely positioned A and B site where the spike can be planted. Attackers who carry the spike and defenders who defend the site have to take very short pathways to each area and this makes most games predictable in terms of where main gun battles will take place.

With clearly defined bomb sites, the game has an intricate mid area with underground passages, sewers and rope mechanisms to access the. This is the USP of the map and makes for some quick, high-speed rushes one from site to the other.

We will look at all three zones, major battle points, good plays to counter pressure and important callouts that will help you eventually conquer Split on Valorant and look like a god amongst teammates.

Attacking on Split is complicated and dangerous. But it is also the more preferred attack route. The map is very defender friendly. Defenders can hold off the main section of the map with ease and strategy plays a very important role for attackers to try and breakthrough defences.

This should be the attacking blueprint for Split.

When attacking A site, attackers go through A lobby to reach A main. When the barriers go down, get ready for some intense firing. This is because A site has a very narrow entry point. KCoffee cubby leads to A main. But, A main gives defenders 2 high vantage points. A rafters and A Ramps are two locations where defenders position themselves to try and pick off brave rushing attackers.

Here, it is crucial to have agents with smokes. Brimstone, Jett, Omen, Viper and Sage are preferred agents to try and push A main. Phoenix is a good shout too. This gives you range and abilities to try and counter the incoming assault. Smoke off A ramps and let one player provide cover fire while others peek A main (the gateway at the end of long) for OP’ers. Opers use this long passage as cover to lay down some heavy fire on incoming attackers. It is a good call to use Phoenix’s Curveballs and Omen’s Paranoia here. Blind opponents on A rafters and A site to then Push A main while teammate holds rafters.

Pro Tip: Use Jett or Omen to get on top of the column on the right side of Rafters. This is a good place to hide when your team rushes A main. Defenders holding Rafters will rush through the L bend to try and outflank planters. This vantage point will allow you to pick them from above.

Another pro tip is to use Brimstone Ult Hellfire to clear out rafters. The room is often choc-a-bloc with defenders who are holding Rafters and Ramps. One ult gives you time to push and plant and then pick them off as they regroup.

Once you clear A long push carefully but check all corners leading up to A site. Rafters is a good place for a sage wall to block out incoming fire but Smokes work well too. Once you plant A site, it is easier to hold. Watch passage to A long through B, Rafters and A main. Three entrances to watch gives you many options to hold them and secure the win.

From KCoffee you can flee A site and go through sewers to mid to try and rotate to B site. If you find a heavy defender presence in A, this route gives you an option to quickly get to B site and overload and plant spike in B. But Beware of Vent Entrance and Top on Mid as attackers on A can get there quicker than you can. So be cautious of this location when you rotate.

Attacking B site is straightforward. There is one direct way into the site and one way through Mid. The direct route takes you through B lobby into B main, which is another highly contested zone. There is usually a slew of attackers on the other side looking to pick you off.

B-site has rafters too much like A site, connected by rope. There are plenty of areas to hide for defenders so be sure to check the left side when you enter B side, the top rafters and B back. A good agent combo for this zone is a Raze + Sova combo. Both can collect intel and cause damage with their abilities. Sovas Ult Hunters Fury is very effective to pick off enemies from B Main.

Pro Tip: Use BoomBot to check blue or B Back before you rush in. Smoke the entrance and use raze to push through after a Recon Dart displaces enemies. Raze’s PaintCan is a very efficient tool to burst into B site and often gets kills as hiding spots are very obvious.

Once you clear out B Site and plant spike, watch B alley and Rafters. B main is hard for defenders to rotate to, so it’s not crucial to watch. Use a sage wall to seal off one entrance and use agents like Reyna and Viper to push smokes and get frags. Reyna is crucial to holding a site down as kills give the agent invincibility for a short time or extra health, making her a force to be reckoned with.

Defence on B is about prediction and diving resources. The team has to strategize on which players have abilities and which combination of agents will be effective at holding each site. Agents like cypher are crucial to holding sites on Split, especially B Site.

Use trip wires on mid entrance and B main. This will give you information to work with as the Cypher can rotate between the two sites picking off people who set them off. Also by combining agents like Cypher and Jett, you can hold B Site efficiently with just two players. Jett can smoke out passages and delay pushes and Cypher can take cover and gather data.

Pro Tip: Use Cypher’s Camera on the far wall of B Main. This wall is hardly checked and can give you an opportunity to tag a couple of unwary players using smokes as a cover and shoot them through the smoke. Or Jett could dash them and pick them off with a Judge or Shorty.

Keep a player of B rafters.  Often the attacking team will push through mid, you will need someone to cover this angle and give you info or just delay their push. This area is an excellent vantage point to get headshots on players pushing through B Main too.

Defending A site is very similar. There are three main points to hold and one main angle to watch. A Main is often the location for an enemy push. Use Rafters and Ramp as vantage points. A long is an excellent point to hold for OP’ers. Watch for smokes and use agents like Reyna or Breach to wreak havoc here.

The L bend on A Main is an area agents like Breach and Sova can exploit. Use the Recon Dart to gather intel and drive enemies backwards or into Sewer. Breach’s Flashpoint and Rolling Thunder can immobilize opponents offering Reyna and Viper mains to charge and take control of this crowded region.

Pro Tip: Use Breach on A Ramp to the cubby on the right. From here, you can flash and disorient enemies on KCoffee or Yoga, forcing them out and getting frags. Shock Darts are excellent tools to attack Yoga as well.

Mid play is crucial on Split. The area is divided into markets, leading into B lobby. Mid Top and Mid Bottom (has opening to sewer) and a passage leading into the vents to A main. The mail room which leads to B site is also a crucial location. This area on Split is important because it connects both sites with short passages. The Mid Vent to A and Sewer to A lobby are crucial rotate points.

Securing Mid and rushing into A or B site is a common play on Split. Hence it is important for defenders to mark this position as well. Several agents come in handy here, but the crucial ones to hold this point at Omen (with his smokes and blinds), Brimstone (smokes and molly) andPhoenix. Phoenix can use Market to flash out defenders then making his team push. Reyna’s Leer also performs the same function on Mid.

Sage walls often come up from the defenders side to delay the push of attackers through mid. Pro Tip: If you see a defensive sage wall, use a player to hold this wall and the rest of the team can rotate to A through Sewers. This ensures that defenders are pinned down on B or Mid and A site usually is relatively free to attack and plant the spike at.

Use these strategies and tips the next time you play Valorant and watch your K/D ratio soar. The main reason for failure on Split is rushing early. Watch angels and try to predict push locations. Also be ready to rotate on moment’s notice. Always be aware of rotating players and angles commonly held. Or you might find yourself killed by an enemy you cannot spot. These tips will equip you with enough information to gain access to Splits common attack and defense points to try and secure the win.