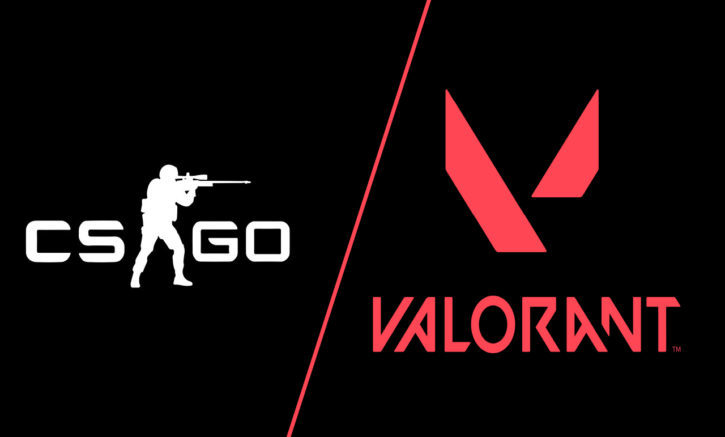 Valve Corporation’s Counter Strike: Global Offensive (CS:GO) has been the dominant FPS in the past few years. But with the launch of Riot Games’ Valorant, the gaming world gained another highly tactical first person shooter. The style and game play immediately drew parallels to CS:GO.

The internet was set alight by the intense battle possibilities in Valorant and has since evolved it’s online presence manifold. We will take a look at this raging debate online on which game is better and try to assess the similarities and differences between the two games and see what sets these two games apart.

With many on the internet calling Valorant “the CS:GO killer” on various internet forums and discussion boards, we will first take a look at what the game does differently to it’s extremely successful and enduring predecessor.

Valorant is a game that looks to be specifically designed to attract a more third person shooter crowd and introduce them to the tactical and cut-throat world of FPS game play. To attract an audience used to fantasy-elements in their combat games, Riot Games has introduced 11 well-sketched out characters.

Each character has a backstory and a set of awesome unique abilities that they carry. They are divided into 4 categories called controller, sentinel, initiator and duelist. They each have a function within the game and their abilities often win you games.

These abilities range from deploying robots that detonate (Fire), gathering intel on opponent whereabouts (Sova) to launching smokescreens (Brimstone) and reviving dead teammates (Cypher). As you can see, these abilities have a profound impact on the outcome of the game when used properly and have awesome animations that are very rewarding and look fantastic.

At first glance, when you enter the game, you might think that the two games share a game engine and will be similar. But Valorant is a new age FPS that borrows from a wider range of influences. The game has 24 rounds of highly engaging game play with a team having to win 13 rounds to secure the game. A CS:GO game has 30 rounds and therein lies the major difference between the two games. Riot Games has ensured that the creators cut down any of the excess fat from the CS:GO game model to make it extremely fast.

The maps in Valorant are tighter. There are fewer vast open spaces and wide corridors. This has been swapped for more narrowly constructed pathways with lesser open places to exchange fire. The turns are sharper and making exchanges more reaction-based. For players of battle royale games like Fortnite and COD, this will be a pleasant shock to the system.

Maps like Split and Haven are prime examples of this. The large buy zone and almost overlapping spawn areas make it almost impossible to spot an enemy within 45 seconds of the round commencing. There is almost a frothing-at-the-mouth anticipation for combat in Valorant compared to the more measured and strategic first minute to 90 seconds of CS:GO. This could be a conscious decision made by the game designers to engage a much more erratic and adrenaline seeking younger gaming audience.

Riot Games have made it a point to provide lag-free, high frame-rate, low ping online play so that even PCs and laptops with moderate specs can run this game without any hassle. The online 5 vs 5 matches will use new 128-tick servers. This is vastly better than the servers offered by CS:GO which run at 64-ticks. This means that the servers are able to process twice the amount of information in a second, so that even crowded servers run smoother.

Forget about getting killed by lagging opponents who almost pull a Harry Potter-esque move on you and disappear and reappear somewhere else to land head shots. Even slow network speeds can run the game lag-free making the online experience much less mentally taxing.

Both games have a win-to-earn system that is very tactical. The more rounds you secure, the more money you have for a full-buy. Eco rounds play a crucial role in both games and the weapon and ability purchasing system on Valorant is similar to the weapon buy screen on CS:GO

Both games are highly tactical and require razor-sharp planning and execution. The 5 vs 5 game play mode makes both games extremely competitive and addictive online formats. Along with this, the spike (bomb in CS:GO) and the two bomb sites on the map and diffuse the bomb format make for an adrenaline inducing online gaming experience.

Weapons in both games are very similar. The weapon response and the tactile nature of the combat make both games a highly intuitive FPS experience. The Vandal plays like the AK-47 and the Phantom is similar to the M4A1 on CS:GO. The Operator in Valorant serves as the main AWP and the Ghost has a similar fire rate and damage to the USP. These weapons will form the top picks for players who are making the switch from CS:GO to Valorant or looking to try a new game. The recoil patterns of the weapons also are comparable making it a smooth transition for players between the two games.

In summary, it seems that Riot Game’s Valorant derives from its highly successful predecessor but does some things better. The raging debate on whether it will overtake CS:GO is of little significance as both games offer players a different gaming experience and it is a matter of personal preferences. CS:GO is a leader when it comes to online FPS games and will continue to be successful, but Valorant has a lot to offer and targets a slightly different audience which has made it popular too.

In the end, there is little separating the two games in terms of gaming experience. It boils down to personal preference. If you are a fan of the fantastic and are thrilled by out-of-the-world abilities in games, Valorant is your pick. But if you like a more grounded, real war-like battles, CS:GO might be for you.

Valorant is CS:GO’s competitor in the FPS space and this competition will spur both games in to making changes in future updates. By having direct competition, these games could feed off each other’s success and making the FPS gaming world better together.